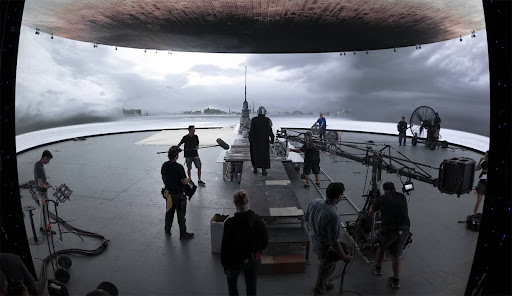 A virtual set integrates real-time people and other real objects with computer-generated digital surroundings and elements to create a seamless virtual reality-like experience. The main feature of a virtual set is that the real-life camera can move in 3D space while the picture from the motion control camera is produced from the same viewpoint. It offers to create 3d virtual set design and even more.

The background stage in a virtual studio set is made of blue or green screen technology, which displays a video-recorded picture that is overlaid in digital design. This implies that when the green or usual blue screen is changed by a digital picture, the images are blended using the Chromakey tool.

A green screen is an important part of the “chroma-keying” process in cinema and television production, which combines foreground action with separately recorded or produced background material. The method involves photographing actors in front of big, brilliant green backdrops, then separating and eliminating the green color region and replacing it with a new one. The abstraction layers take over once the film is captured: the new background is composited into the scene.

The chroma key separates the green or blue color background and replaces it digitally by making it transparent. This allows the other image to be seen through it. To create a final video output, a video mixer mixes the footage from the camera with the video from the real-time rendering software. One of the most popular techniques to mix video is to replace the chroma key background.

3D Virtual sets are now pretty expensive, and the image resolution might not even be particularly good, but the productivity benefits are considerable. Real elements and actors can interact in real-time with computer-generated surroundings and objects in a virtual studio.

For a wide spectrum of news, sports, entertainment, and other broadcast projects, virtual set design and software suppliers make virtual, 3D worlds a reality. Another distinctive aspect of the virtual studio set is the choice to use the motion control camera to continue moving in the green screen virtual set, which implies that the virtual situation can acclimate to camera settings for capabilities like zooming, tilt, pan, and so forth, thanks to the combination of state-of-the-art 3D models with advanced software and hardware. In-camera tracking, optical or mechanical data are utilized to provide a live stream of data that describes the camera’s precise viewpoint.

Along with the numerous advantages of today’s computer graphics for visual graphics modification.  We can achieve incredibly natural and amazing appearing shots using a Motion control camera.  It can be moved in a scene to follow a pattern of subject or movement.

The camera tracking data is used by real-time rendering software to create a synthetic view of a television studio. This technology, when combined with more advanced 3D techniques, may add any new real-life aspect to complicated moving pictures. The various camera settings can adjust at any moment to stay in sync with the actors’ actions.

Virtual production, unlike previous technologies, is done in real-time and does not need post-production. 3D Virtual sets are easier to design and do not need a huge number of people. It’s incredibly adaptable and opens up a lot of possibilities for experimentation and creativity. The end product is also cost-effective, and it is growing rapidly.