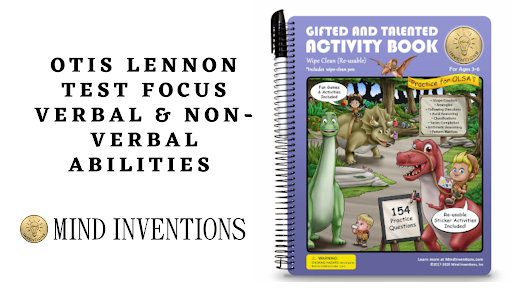 Students from age 4-18 undergo OTIS Lennon Test to get admissions in the school. A variety of skills & abilities are measured to know if the student is capable of getting admissions or not. It’s not an IQ test but sounds more like an achievement test that shows students basic learnings.

The test is categorized into two parts – verbal and non-verbal. The verbal section contains reasoning-based questions, whereas the non-verbal contains pictures & figural classification. Depending on the student’s age, the test is prepared. For small kids, the test is administered personally, and for older students, a large group is held to conduct the test.

Keep reading to know in-depth what things are covered in two categories of tests.

What Verbal Part Contain in OLSAT?

The child’s ability is tested by following direct questions. In this, a statement is given which the child needs to follow. For instance, the child is asked to mark a picture where a librarian reads a book to two girls. So, the child will have 4 or 5 images and, according to the statement, will mark the picture.

Aural reasoning is designed to see the child’s understanding of basic objects, tasks, and everyday protocols. For instance, a question is asked which animal loves to play with balls of yarn? A child will be asked about some regular household chores which he/she sees every day at their home.

Arithmetic reasoning involves mathematical analysis & calculation. Now the test is according to the age of the students. For small children, they might get questions based on shapes, addition, subtraction, numbers, etc. The test can be done verbally by singing or quiz to make it more interesting.

In this type of section, figures & images are shown to the children. They should have a better understanding of which common figures & images belong to one group. However, they have to mark the odd one.

This is similar to the word analogies. Firstly, the two pictures are shown which are highly related to each other. Then with the other image, the child needs to decide from the 4 images options that relate to the image. Undoubtedly, candidates need to select one choice which must be correct.

This is a bit complex, but with a practice book, the child can understand how to perform it. Questions include 4 or 5 pictures or figures. These are called problem figures that show a change step by step. Now the candidate will see the answer figures and choose the one that continues the series followed by the problem figures.

The OTIS Lennon test is important for child development. It’s not meant for comparison but to ensure that the child’s basic skills are strong, which helps them down the road. Parents seek help from practice books to make their students learn thoroughly and build their logical skills.